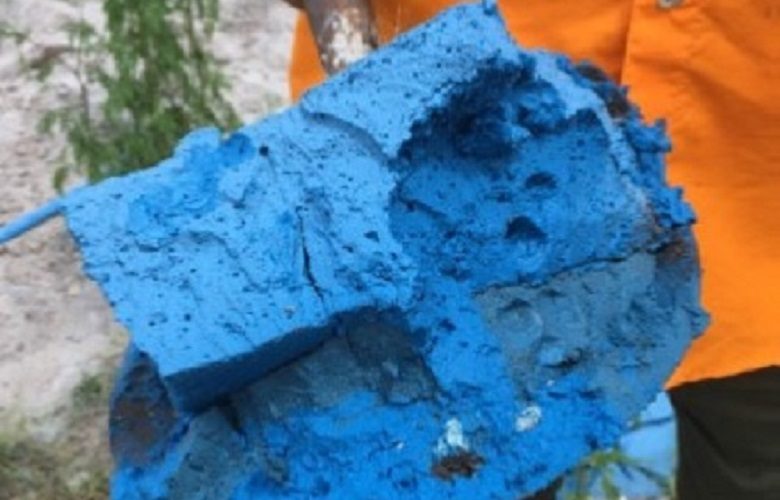 EPR makes use of the old pipe as a pilot hole and incorporates a guide to control the alignment and provide a void ahead of the rehabilitation head where EncapsulAC® is introduced into the train. An EPR Head decommissions and fully incorporates the old pipe into a new Encapsulation matrix which creates a coagulated envelope around the new pipe as it is simultaneously drawn through the old pilot hole’s exact path, creating traceability of ACMs along the path of the old pipe

EncapsulAC® can be used with trenchless technologies including Pipe Bursting and Spliting, Close Tolerance Pipe Slurrification (CTPS) and even open cut trenching. It is designed to encapsulate the AC pipe fragments creating a coagulated mass that is workable and does not harden like cement.

EncapsulAC® is manufactured in a dry powdered form and mixed to a slurry on site prior to use and forms a gel on completion of the EPR process.

EncapsulAC® has been demonstrated in the USA to:
1. Provide full coverage of the encapsulation fluid around the fragments of remaining asbestos cement pipe (99.9% coagulation CTPS & +/- 85% coagulation with pipebursting)
2. Meets Negative Exposure Testing for air samples (WRF-4465-093 Dated 2015)
3. Allow workability and early detection
4. Encapsulated pipe fragments were easily observed and safely pushed to the side to allow the installation of the service connection
5. Integrates well with existing equipment and tooling for pipe replacement operations and doesn’t add significant time to the operations.

The benefits of implementing EPR & EncapsulAC® include:
• Encapsulating the AC fragments and fibres rendering them safe
• Providing a strong visual indicator of the presence of encapsulated AC material
• Allowing the use of cost effective and safe trenchless technologies for rehabilitating AC pipes.
• Offering the potential to allow the safely encapsulated AC pipes remains, to remain in a well defined and documented corridor in a readily identifiable and safe condition for future operators working along these corridors.
• Reduces the risks associated with digging up and transporting AC
• Reduces the burden of developing and maintaining permanent, separate and specific landfill sites to deal with the large amount of AC waste that would be generated by digging up and removal
• Reduces the long term liability and risk of abandoning old AC in corridors adjacent to working assets where they may not be easily identified.
• CTHDD has US-EPA’s approval as an “Owner (stakeholder) Approved Alternate”